In technical terms, an inverse-square law is defined as "any physical law stating that some physical quantity or strength is inversely proportional to the square of the distance from the source of that physical quantity". With a definition like that, you're probably wondering what on earth this could possibly have to do with photography (and no one could blame you). Inverse-square laws apply to many, many things in the world. Today however, we're only going to be looking at one of them: light.

For those of us without an intense knowledge of advanced mathematics (or even very basic mathematics for that matter) something such as the inverse-square law can seem incredibly daunting. There are equations with numbers and variables, references to physics and many more things which quite frankly seem very boring. For that reason we're going to try to cover this in a very practical way, rather than a technical one.

The law itself, in photography, applies to lighting. It applies to any sort of lighting really but its most relevant application is with off camera lighting. In a nutshell, the inverse-square law teaches us how light works over distance and why the distance between your light source and your subject is so important.

Let's say we have a light source which is on full power and our subject is 1 meter away it. If we move our subject double the distance away from the light (2 meters), how much of the light's power will reach it? The natural reaction is to think "half power" - but unfortunately that's now how light works, it follows an inverse-square law.

According to the law, the power of the light will be inversely proportional to the square of the distance. So if we take a distance of 2 and square it, we get 4, the inverse of which would be 1/4 or rather, a quarter of the original power - not half.

Here's how the drops in light power work from 1 to 10 meters, remember that each one is simply the distance squared, over 1. 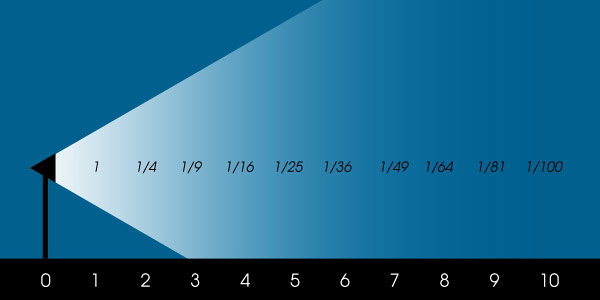 The inverse square law explains the dramatic drop-off in light over distance. We can use this information to better understand how our lights are affecting our subject and by that measure, how to control them better.

Putting It to Work

So knowing about light fall-off is fun and everything... but how can we put it to good use in our photography? Well, it's all about exposure and relative positioning. When a light shines in a particular direction, initially the drop-off in light is very quick, then it slows down the further it goes.

If we look at our light drop-off from 1 meter to 10 meters in percentages to the nearest whole number, it would look like this: 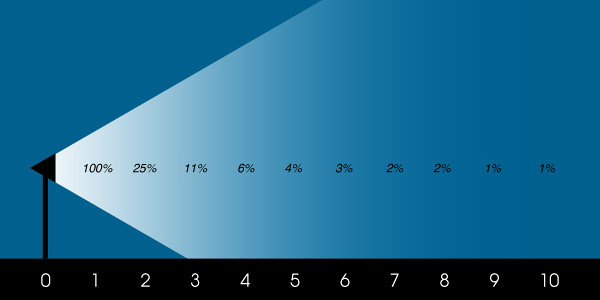 So we understand that there's lots of power very close to the light source, but only a very small amount of power far away from it. On that basis, to get a correct exposure (assuming we use a consistent shutter speed), if the subject was very close to the light then we would need to set our aperture to around F16, to block out all the excess light.

If, on the other hand, the subject was very far away from the light, then we'd set our aperture to around F4 in order to let much more light in. Both photographs should look identical because we've adjusted our camera to let in the same amount of light for each one. 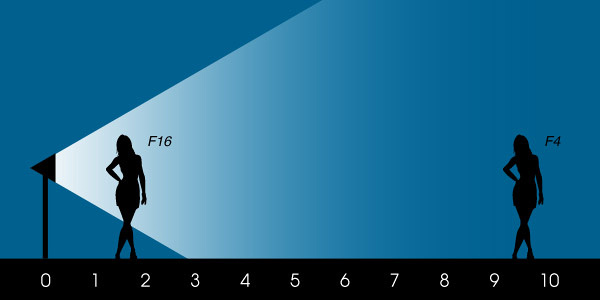 So on that basis, we can plot out a rough estimate of where all the correct F-Stops are to get a correct exposure level. Remember that the light drops off very fast at first, then slower. In the same way, we open up our aperture very fast to start with, then slow down the further we get away from the light. 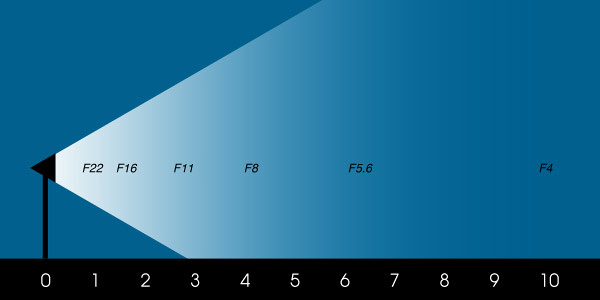 Let's move those F-Stop reference numbers up to the top of our diagram as a handy point of reference. Now, some subjects don't move, which means that once you place it a certain distance from the light source you set your exposure and that's it.

However, if you're shooting another person (especially a standing person) they have a tendency to move around. If your model is very close to your light source and she (or he) moves a half step in either direction then she'll immediately be massively under or over exposed. 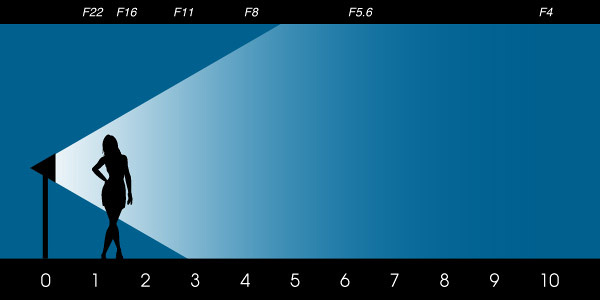 However if the model is further away from the light then she can move several steps in either direction without you needing to change any settings on your camera at all. 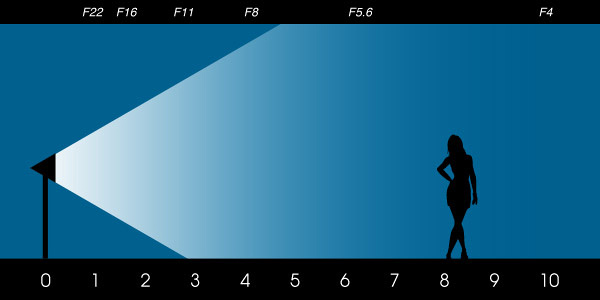 The previous rule works in a very similar way with groups of subjects. If you have all of your subjects very close to the light, then the one furthest away from the light will be very under-exposed compared to the one which is closest to it - covering the range from F22 all the way through to F11. 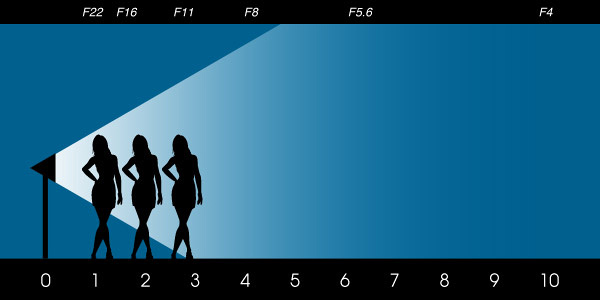 But if you move all the subjects away from the light source, then they become lit pretty evenly around F4. 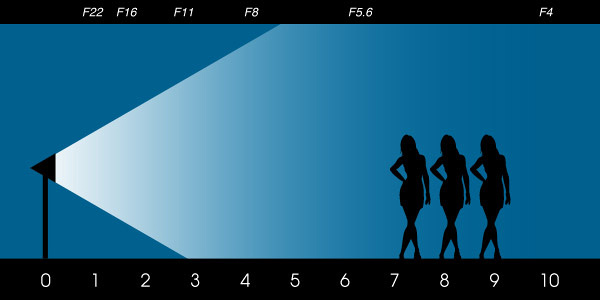 Of course sometimes you actually want one element of your photo to be bright and one to be dark, such as with a background. So, if you were to place your model very close to the light source with a backdrop some distance away, then (assuming your model is exposed correctly) the backdrop would be very under exposed. 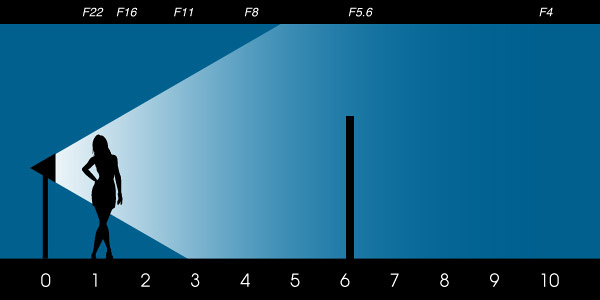 If you instead wanted to have a bright subject with a bright background, then you would have both of them further away from the light source, but close to each other. 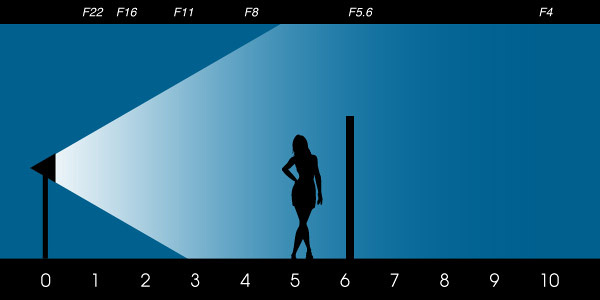 This has only been a very brief introduction to the inverse-square law as it applies to light sources in photography. There are many, many variables that can all be tweaked for different effects, such as shutter speed, the brightness of the light source, and adding multiple lights.

Hopefully however, you now understand the basics of the inverse-square law and you can start applying them to your photography to achieve better, more consistent lighting.